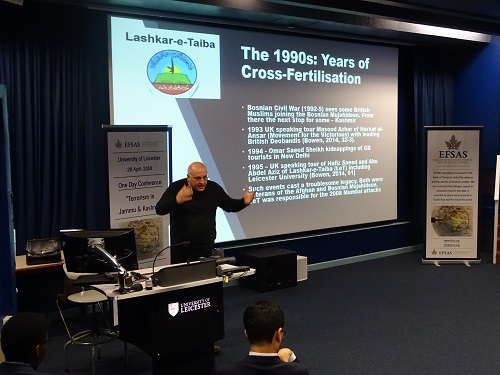 The Conference further welcomed Dr. Paul Stott and Mr. Junaid Qureshi as key-note speakers, who in their lectures to the participants, gave background information on Terrorism in Jammu & Kashmir, Indo-Pak relations and the Jammu & Kashmir conflict. Through an in-depth analysis from their respective areas of expertise, the speakers fostered students' critical thinking, and enhanced the knowledge and understanding of the participants in relation to the sensitivities and complexities of the Jammu & Kashmir conflict.

Mr. Junaid Qureshi, a Kashmiri writer and Director of EFSAS began his speech by bringing the attention of the participants to the year of 1995 when Hafiz Saeed, currently the Chief of Lashkar-e-Taiba, mastermind of the 2008 Mumbai attacks and an UN-designated terrorist, held a speaking tour across UK mosques, Islamic centers and universities, inciting students to fight in Indian Administered Jammu & Kashmir. The University of Leicester was one of the universities, part of this tour, where Hafiz Saeed spoke to an audience of 4,000 young people, trying to recruit youngsters from the South Asian diaspora to fight in Jammu & Kashmir. Mr. Qureshi expressed his satisfaction that the University of Leicester, decided to rectify its mistake of hosting Hafiz Saeed, by after 23 years, in 2018, inviting him (Mr. Qureshi), to the same stage to tell the truth and point out that Hafiz Saeed’s lectures at the same University in 1995 were acts of terrorism which had only brought death and destruction to Jammu & Kashmir and the region of South Asia. In his lecture, Mr. Qureshi pointed out that State-sponsored terrorism in Jammu & Kashmir started in 1947 when the newly created State of Pakistan invaded Jammu & Kashmir, in which the invaders comprised of tribesmen from Pakistan’s North West Frontier Province (NWFP) and regulars from its Army.

Mr. Junaid Qureshi speaking at the University of Leicester

Mr. Junaid Qureshi narrated how acts of violence in 1989 marked the rise of terrorism in Indian Administered Jammu & Kashmir and explained that the end of the Soviet occupation of Afghanistan released a great deal of militant energy, whereby the Pakistani Military establishment and Intelligence Agencies provided arms and training to militants and relocated them to in Indian Administered Jammu & Kashmir. The terrorists engaged in communal violence among different religious groups and specifically targeted Kashmiri Pandits, a minority Kashmiri Hindu community. He further elucidated on how terrorists succeeded in intimidating local people as well as local authorities through their tactics and that this covert armed militancy was a strategy on behalf of Pakistan through which the Islamic country intended to fight India while avoiding an all-out war. The Director of EFSAS stressed that in essence, the violence in Jammu & Kashmir was a proxy war against India through which Pakistan attempted to impose a heavy political and economic burden on its nuclear neighbour. He added that the Military establishment of Pakistan provided all kinds of support including training, ammunition and shelter to the terrorists in a bid to bring down Indian authority. Mr. Qureshi concluded by saying that the soil of the State of Jammu & Kashmir has been blemished by years of terrorism, military power, proxy warfare, toxic propaganda and rise of extremism, and that guns and bombs will not solve the Jammu & Kashmir issue - on the contrary, it will only lead to more deaths and destruction. He called upon the participating students to deliberate with the objective of devising and proposing alternative narratives which could liberate the region from terrorism, violence and fear currently endured by the people of Jammu & Kashmir, India and Pakistan. He concluded by saying that only an environment of tranquility could eventually pave the way for a peaceful political solution to the Jammu & Kashmir conflict.

Dr. Paul Stott speaking at the University of Leicester

Dr. Paul Stott, author of various books on Jihadism, lecturer at the University of Leicester and in the Centre for International Studies and Diplomacy at SOAS, University of London, discussed the British-South Asian Jihadist nexus through providing a detailed historic outline of the cross-fertilization of violent extremism in both parts of the globe and examining the foundation of growing Islamism in Britain. According to him, terrorism in the region of Jammu & Kashmir started with Mrs. Margaret Thatcher’s visit to Pakistan, while the country was going through a process of ongoing Islamization, and her meeting with General Zia-ul-Haq in 1981, which was seen by both countries as an endorsement of Islamist struggle against Communism in Afghanistan. Dr. Stott further highlighted the 1993 UK speaking tour of Masood Azhar of Harkat ul-Ansar, which received the support of leading British Deobandis and during which, Masood Azhar promoted the concept of Jihad, which young Britons should undertake, resulting in the involvement of Omar Saeed Sheikh, a British National, in kidnappings of British tourists in New Delhi in 1994. Dr. Stott continued his presentation with 1997, when the Muslim Council of Britain (MCB) was established, which exhibited a very deep Jamaat-e-Islami influence and openly supported armed struggle in Jammu & Kashmir, while lobbying hard against UK counter-terrorism policies. Dr. Stott also shed light on the British-South Asian terrorist nexus in the face of numerous examples, such as the 1994 kidnappings in New Delhi and Jammu & Kashmir by Omar Saeed Sheikh, a British National, in an attempt to free Masood Azhhar, the first British suicide bomber in Afghanistan by Khalid Shaheed, who was Birmingham born, the 2000 suicide attack at an Indian Army base in Srinagar by Mohammed Bilal from Birmingham, belonging to Jaish-e-Muhammad, and the 2002 kidnapping and murder in Karachi of Daniel Pearl, also involving Omar Saeed Sheikh. He also provided a list of attacks and thwarted plots in the UK with connections to South Asia in general and Pakistan in particular, namely the Operation Crevice case in 2003, the London Transport Bombings (7/7) in 2005, the Botched 21/7 bombings, the Liquid Bomb Plot in 2006, the Exeter Restaurant bombing in 2008 and the 2009 Manchester Arndale Centre plot. Following his extensive historical analysis, Dr. Paul Stott posed a vital question to the public; When the Jihadists are defeated in Syria and Iraq, where will their attention turn to next? He expressed his fear that Jammu & Kashmir could be seen as a possible next battlefield by these hardened terrorists.

Following the speeches of Dr. Paul Stott and Mr. Junaid Qureshi, participants engaged in intense debates, in which they discussed the historical conflict between India and Pakistan over the region of Jammu & Kashmir, terrorism in Jammu & Kashmir and the recent involvement of China through the building of the China-Pakistan Economic Corridor. At the end of the Conference, the participants succeeded in drafting a comprehensive Resolution, which outlined certain recommendations for combating terrorism in the region; The students supported the creation of programs to address growing radicalization of youth in Jammu & Kashmir and encouraged the implementation of tougher counter-terrorism policies including, but not limited to, the creation of bilateral agreements between India and Pakistan to share intelligence. While strongly condemning terrorist infiltration along the LoC, the Resolution also called for an assessment of measures at the LoC in order to address cross-border terrorism and the illegal transport of arms. The Resolution also endorsed initiation of a trilateral dialogue between China, India and Pakistan on the legality of the construction of the China-Pakistan Economic Corridor (CPEC) in relation to the disputed territory of Gilgit Baltistan (part of Jammu & Kashmir) and further stressed the need for dialogue between India and Pakistan to de-escalate violence in the region and called upon both countries to focus on ensuring protection and respect for human rights.

Certificates of Excellence given by Mr. Junaid Qureshi to the most outstanding debaters

During the closing ceremony of the Conference, Mr. Junaid Qureshi awarded the three most outstanding debaters with Certificates of Excellence for their pro-active debating skills and intellectual arguments. The one-day Conference was followed by a networking reception for students, professors and academics, hosted by EFSAS.