The European Foundation for South Asian Studies (EFSAS) organized a Seminar, ‘Terrorism in South Asia; Challenges for the West’, during the world´s largest Congress in the field of Crime Prevention held in Dresden, Germany, on the 11th of June 2018. The event was hosted by the German Congress on Crime Prevention, in collaboration with the Federal State of Saxony, the city of Dresden and the Crime Prevention Council of Saxony and the topic of this 23rd Session was ‘Violence and Radicalism - Current Challenges for Prevention’. The Seminar was moderated by Ms. Yoana Barakova (Research Analyst EFSAS).

EFSAS organized its Seminar under the Conference’s Annual International Forum (AIF), established to address the international audience with the aim to add an international perspective to the German Congress and share experiences in crime prevention, terrorism and radicalization on an international level.

Mr. Junaid Qureshi, Director of the European Foundation for South Asian Studies (EFSAS), delivered a lecture and elucidated the remarkable expansion of terrorist forces in the region and challenges for the West while thoroughly discussing the origins of the issue and its geopolitical nature.

In his speech, Mr. Qureshi said that the multi-layered dimensions of international terrorism have clearly demonstrated the blurring of lines between internal and external security and between the domestic and international aspects of counter-terrorism policies and stressed that effectively tackling radicalization in the West also entails a better understanding of local drivers in other regions, such as South Asia. 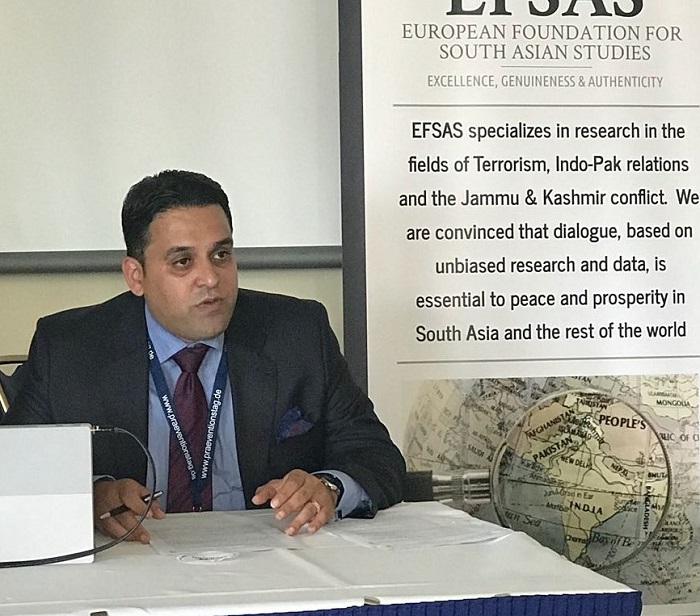 The Director of EFSAS explained that like many other regions, South Asia also encounters a rapidly transforming violent extremist landscape that is increasingly transnational in nature, and that local grievances and socio-political dynamics are exploited by terrorist groups such as Al-Qaeda, ISIL, Hizbul Mujahideen, Lashkar-e-Taibah, the Afghan and Pakistani Taliban, and many others, generating a global master narrative of conflict. He added that many of these groups are known to receive active support from State actors to pursue strategic objectives.

Explaining the nexus between religious extremism in South Asia and radicalization in the West, Mr. Qureshi said that many terrorist organizations having their origins and stronghold in South Asia or individuals inspired by these organizations, have admitted being involved in terrorist attacks in the West, made explicit threats to attack the West, and have also claimed responsibility for such attacks. He substantiated his findings by citing academic sources confirming the fact that extremists in the West are known to have derived inspiration from terrorist organizations in South Asia and remain in close contact with leaders of such organizations, and that a large number of these terrorists have themselves confessed to have undergone psychological and military training in terrorist camps in Afghanistan, Bangladesh and Pakistan.

He further solidified his remarks by citing examples of terrorist attacks having a nexus with South Asia: Three pilots involved in the 9/11 attacks were trained at Al-Qaeda training camps in Afghanistan; Umar Patek involved in the 2002 Bali bombings, was found hiding in Abbottabad, Pakistan, in early 2011; The key connection between Al-Qaeda’s central leadership and the 2004 Madrid train bombings network, Amer Azizi, a Moroccan, received training in a military camp in Afghanistan and travelled from Pakistan to Spain in 2003, to finalize the bombing preparations; Three out of the 4 bombers involved in the 7/7 London bombings in 2005 were British-born sons of Pakistani immigrants; In 2008, the TTP took responsibility for the Barcelona terrorist plot, which was conspired by two Indians and a dozen Pakistanis, one of whom received training in Waziristan, Pakistan; In 2009, Najibullah Zazi, an American of Afghan origin was arrested because of planning suicide bombings on the New York City Subway system and admitted having underwent weapons and explosives training at an Al-Qaeda training camp in Pakistan in 2008; A year later, a terrorist attack was attempted in Times Square by Faisal Shahzad, a 30-year-old Pakistan-born resident of Connecticut.

Mr. Qureshi further emphasized on the perilous interlink between terrorism in South Asia and the West by highlighting the terrorist attack of December 2015 in San Bernardino California, perpetrated by a married couple of Pakistani descent and the New York City subway attack by a 27-year-old Bangladeshi born lone wolf terrorist in December 2017. He further added that in the attacks on Mumbai in 2008, which killed more than 160 people, it was the other way around, where a radicalized Westerner went to South Asia, in this case to Pakistan, to assist in perpetrating attacks in India. Under the directions of Lashkar-e-Taibah, David Coleman Headley, an American citizen, performed five spying missions to Mumbai to scout targets for the deadly attacks and in 2013, a US court sentenced him to 35 years in prison for his role in the Mumbai attacks.

Mr. Qureshi said that these and other attacks in Europe have exposed the deficiencies in counter-terrorism policies across the continent which have left Europe and, in the case of David Headley, South Asia, particularly vulnerable. He concluded by saying that there is a critical need in raising awareness across Western countries and offering practical guidance and training on addressing terrorism and violent extremism that originates from South Asia, which has seen an increase in recent years. He reiterated that, first and foremost, this should include understanding South Asia and its complexities, before the West, in collaboration with South Asian countries, can embark upon a path of devising strategies which can successfully challenge extremist narratives and ideologies, which should include that Europe and the EU, in bilateral relations with South Asia, assert heavy diplomatic and economic pressure on States which covertly support religious extremists and terrorist organizations and continue to view these as strategic assets.

The Seminar organized by EFSAS was well attended by Security Officials, Government Agencies, Policy-makers, Human Rights Activists, Scholars, Academicians and Students from all over Europe.