The European Foundation for South Asian Studies (EFSAS) hosted a very vibrant and thought-provoking Webinar titled, ‘The Pakistan Experiment: State Oppression, Terrorism and the Rise of the Pashtun Tahafuz Movement (PTM)’. A panel of human rights activists, academic scholars and researchers in the field of Pakistani politics, ethnic conflict management and Pashtun human rights, discussed the State oppression on behalf of the Pakistani State vis-à-vis the Pashtun ethnic minority.  The event was moderated by Mr. Malaiz Daud, EFSAS Research Fellow, Former Chief of Staff of Afghanistan’s President Ashraf Ghani and Research Fellow at the Barcelona Center for International Affairs, and was attended by human rights activists, NGO representatives, scholars and policy advisors.

The first speaker was Ms. Gulalai Ismail, a forefront Pashtun human rights activist, Chairperson of the Aware Girls and the Seeds of Peace Network. As the recipient of the International Humanist of the Year Award from the International Humanist and Ethical Union, and of the Foundation Chirac Peace Prize for the Prevention of Conflict, she deliberated upon the long history of oppression that the Pashtun people have been suffering at the hands of the Pakistani State. As she explained, the war on Pashtun identity has been as old as British colonisation, since the British engaged with the population in order to fulfil their own objectives vis-à-vis the strategic location of the community that acted as a buffer zone in the ‘Great Game’ for Afghanistan against the Russian Empire. In their discourse, the Pashtuns were seen as a martial and lesser race. In a similar manner, the Pashtun Belt is still viewed as a buffer zone by the Pakistani military establishment today, providing the back bone for Pakistan’s strategic depth in Afghanistan. As she exemplified, the Pakistani army has been using Pashtuns for its own geopolitical aims in the civil war in Afghanistan and the incursions into Jammu & Kashmir. Thus, in real terms, Pakistan has maintained the colonial structures and patterns established by the British. Ms. Ismail argued that precisely due to those austere colonial-era laws, which deny Pashtuns the right to life, the right to development, democracy, and human rights, and render them victims of collective punishments, discrimination and violence, the Pashtun Tahafuz Movement (PTM) has risen to ask for basic human rights, such as the right to life, the right to justice and the right to free and fair trial. However, due to its bravery and confidence in openly pinpointing the root cause of the problem in a peaceful manner, the PTM is currently treated as an existential threat by the Pakistani military establishment. As Ms. Ismail further explained, the killing of Naqeebullah Mehsud in 2018, epitomized the oppression and dehumanization of the Pashtuns by the State and played a key role in the formation of the PTM, which currently consists of primarily young people in their 20s, who use non-violent protests, mass demonstrations and social media channels to express their plight. As a counter- measure, the Pakistani State has been using its media influence to undermine the PTM narrative in mainstream media outlets, amplifying the narrative of the Pakistani Army and silencing any dissent. In addition to that, counter-terrorism laws have been erroneously deployed to target human rights activists and Pashtun intelligentsia, forcefully disappearing Pashtuns, alongside with other ethnic minorities such as Sindhis and Baloch. As Ms. Ismail stated, the PTM has successfully exposed the war economy of the Pakistani Army, and has managed to reshape the Pashtun politics and identity, making them more revolutionary and egalitarian, especially by mobilising and empowering women and girls, which take active part in the movement. As she concluded, the PTM’s struggle will be a long and tiring journey, yet radical changes are made one step at a time.

Dr. Ayyaz Mallick, who is based at York University in Toronto, Canada, specifically focused on the role of urban and rural spaces in the emergence and impact of PTM. Echoing the argument of Ms. Ismail, Dr. Mallick suggested that Pashtuns have historically been marginalized based on their stereotypical depiction as a ‘martial race’, first introduced by the British in colonial times in the context of the ‘Great Game’ and then maintained by the Pakistani State following the partition of British India. This marginalization and the historical instability and volatility of the Pashtun Belt, Dr. Mallick contended, contributed to the growing migration of Pakistani Pashtuns to urban centres in Pakistan in search of access to labour and education, a process that has reconfigured the spatial concentration of Pashtuns in the country. Regarding the emergence of PTM, Dr. Mallick stated that the 2018 killing of Naqeebullah Mehsud in Karachi, a city spatially distant from the Pashtun Belt, sparked outrage in the (Pashtun) periphery before spreading to the urban core of Pakistan via the presence of young Pashtuns that had earlier moved to urban spaces, meaning that the protests obtained a spatial character that reflects the transforming spatial experience of the Pashtun community. PTM, Dr. Mallick argued, has been unique in its emphasis on the use of social media as a means of communication and the dissemination of information, thereby reformulating the understanding of what it means to be Pashtun. According to Dr. Mallick, the PTM raises serious concerns for the Pakistani political establishment, which seeks to avoid a situation in which the PTM emerges as a symbol for the oppression of other ethnic minorities in Pakistan. For Dr. Mallick, the matter of geographical space obtains a key dimension in the contemporary relationship between Pashtuns and the Pakistani State as the State legitimizes land-grabbing activities via counterterrorism operations in Pashtun areas, rendering counterterrorism operations and anti-Pashtun activities and crimes a constitutive component of the neoliberal projects of the Pakistani State and army. These operations and activities, Dr. Mallick suggested, are legitimized by the historical-discursive construction of Pashtuns as ‘martial’. Dr. Mallick concluded that the social space of the ‘urban’ has emerged as a new theatre for social dispute and contestation due to the increased Pashtun migration to these areas, with the PTM ultimately forming a central node of connection for other oppressed groups in Pakistan such as Baloch, Sindhis and Shias.

Dr. Muhammad Zubair holds a PhD from the University of Indiana and is a former professor of Constitutional Law at the Univeristy of Peshawar. He particularly focused on the role of Pashtuns in Pakistan’s policy of ‘strategic depth’ in Afghanistan, which seeks to maintain a Pakistan-friendly ruling power in Afghanistan. This policy, Dr. Zubair suggested, requires the military establishment to distinguish between ‘good’ and ‘bad’ Taliban and legitimizes the conduct of military operations in the former Federally Administered Tribal Areas (FATA), resulting in systematic human rights violations in the Pashtun Belt and a systemic denial of even the most basic human rights to Pashtuns. Human rights, Dr. Zubair highlighted, are guaranteed by the Pakistani constitution - yet, legal frameworks such as the Frontier Crimes Regulation and other (post-)colonial legislations and practices have enabled the military to act with impunity in the area and sustain the colonial structures established by the British Empire. The PTM, Dr. Zubair averred, reacted to this structure and the co-opting of Pashtun political parties by the Punjabi-dominated political mainstream that culminated in a lack of genuine political representation. The PTM has used a tactic of ‘shock and awe’ in its protests, enabling other organizations to portray the same courage and ultimately transforming the national discourse regarding the army, openly criticizing its socio-economic role and functions. Crucially, Dr. Zubair argued, the PTM has popularized the idea of constitutionalism, referring to the notion that the State and its institutions are restrained by constitutional provisions - as such, the PTM’s narrative is redefining the relation between the Pakistani State, the Pashtun population and the Pakistani citizenry more generally. Dr. Zubair furthermore contended that the PTM has questioned the structure of the present constitutional order and its majoritarian bias towards Punjabis by calling for a recognition of Pakistan’s ethnic diversity and a more decentralized institutional arrangement of Pakistan that enables ethnic minorities to yield the economic benefits from the resources on their land, hereby employing a discourse that has references to international law and the Rousseaun notion of national self-determination. For Dr. Zubair, the PTM embodies the concerns of the people hurt by Pakistan’s ‘strategic depth’ policy in Afghanistan. 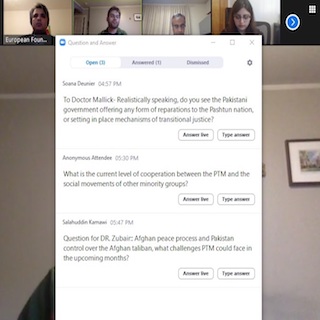 The event was followed by a very informative Q&A session, during which the audience and speakers exchanged opinions on various topics, including the cooperation between the PTM and other pro-democracy social and minority movements; the high levels of female participation and engagement in the movement; and, the challenges the PTM could suffer in the face of Pakistan’s control over the Afghan Taliban.