EFSAS raises South Asia with NGOs and MEPs in Brussels

Members of EFSAS, Ms. Yoana Barakova (Research Analyst) and Ms. Isabela Fávero (Research Analyst) held a meeting with Ms. Adriana Florit Ballester, accredited advisor of the MEP Mr. Javier Nart, Vice-Chair of the Group of the Alliance of Liberals and Democrats for Europe and Member of the Committee on Foreign Affairs and Member of the Subcommittee on Security and Defence. The EFSAS delegation generated recommendations for a Resolution on the situation in Afghanistan and highlighted the necessity for joint counter-terrorist and counter-narcotics strategies. The building of the China-Pakistan Economic Corridor (CPEC) through the disputed territory of Gilgit Baltistan, part of Jammu & Kashmir, which insinuates the ongoing human rights violations against the indigenous people was further deliberated upon. EFSAS was invited to provide its expertise on the developments in the Indian Subcontinent whenever recommendations for resolutions are drafted.

EFSAS also attended an event called “American Grand Strategy in the Age of Trump” organized by EGMONT – The Royal Institute for International Relations, based in Brussels. Professor Hal Brands, Henry A. Kissinger Distinguished Professor of Global Affairs at the Johns Hopkins School of Advanced International Studies in Washington D.C. presented his opinion on the Donald Trump’s presidency and what does this mean for US’ foreign policy. During the Q&A session, EFSAS tackled the implications of America’s latest decision on severing its financial aid to Pakistan and inquired what could be the repercussions of such manoeuvre on the political stability of the South Asian region.

Ms. Yoana Barakova (EFSAS) with Prof. Hal Brands, Henry A. Kissinger Distinguished Professor of Global Affairs at the John Hopkins School of Advanced International Studies in Washington D.C. during the event at the Egmont Institute.

The members of EFSAS further met Ms. Matilda Flemming, European Affairs and Partnerships Manager, and Ms. Clémence Meric de Bellefon, European Affairs and Partnerships Associate, from Search for Common Ground, an NGO with headquarters in Washington DC and Brussels. EFSAS discussed the pressing need for secular educational programmes in countering violent extremism amongst the youth and the role of the media which plays a part in it. Opportunities for future collaboration and joint campaigns were additionally explored. 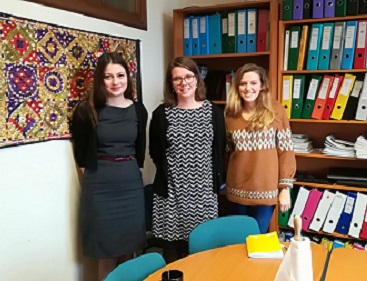