16 March 2021, Amsterdam: The European Foundation for South Asian Studies (EFSAS) hosted a very well-attended and successful Webinar titled, “Trajectories of Terrorism in South Asia post US withdrawal from Afghanistan", on the sidelines of the 46th Session of the United Nations Human Rights Council (UNHRC). A high-level panel of diplomats, policy analysts and scholars in the field of terrorism and South Asian geopolitics discussed the likely developments in the region of South Asia following a possible US troops pull-out from Afghanistan. The event was moderated by Mr. Junaid Qureshi, Director EFSAS, and was joined by up to 40 attendees, including human rights activists, NGO representatives and researchers. Many of the attendees were young people from India, Pakistan, Afghanistan and the region of Jammu & Kashmir.

His Excellency Dr. Nasir Ahmad Andisha, Ambassador and Permanent Representative of Afghanistan to the UN in Geneva and Former Deputy Foreign Minister for Management and Resources, retraced Afghanistan’s geopolitical trajectory and specifically discussed the modern role of Pakistan. Historically located between Central Asia, South Asia and the Middle East, Dr. Andisha argued that Afghanistan had long served the function of a buffer State, first between Czarist Russia and British India and later between the Soviet Union and the United States (US). Over time, however, Afghanistan has also emerged as an ‘insulator’, absorbing the political shocks and developments from surrounding regions. The invasion of Afghanistan by the Soviet Union in 1979, Dr. Andisha suggested, provided Pakistan with the ‘golden opportunity’ to boost its defence, diplomacy and development cooperation with the US, NATO and the Organisation of Islamic Cooperation (OIC). By inserting itself into Afghanistan, Pakistan thus gained diplomatic leverage over other regional actors. Yet, over time, Islamabad has increasingly lost control over the regional security dynamics. Considering the regional role of India, which Dr. Andisha viewed as remaining focused on its own domestic affairs, he added that the government of Imran Khan has seemingly managed to somewhat control terrorist organizations within Pakistan, however Pakistan could nevertheless become the destination of more battle-hardened Taliban following the US withdrawal from Afghanistan. As such, Dr. Andisha opined that the future trajectory of terrorism in the region especially raises concerns for India, also as the close ties between Pakistan and the Taliban could further jeopardize relations between the Afghan and the Indian governments. He also said that if the ‘Khalilzad plan’ succeeds and the Taliban has a strong presence in a future Afghan Government, Pakistan will have an easy but plausibly deniable access to land and to hard-line and battle-hardened Taliban across the Durand line.

Dr. Michael O’Hanlon, Senior Fellow and Director of Research in Foreign Policy at the Brookings Institution and adjunct Professor at Columbia University and Georgetown University, spoke about the strategic implications of the US withdrawal from Afghanistan. Dr. O’Hanlon argued that the contemporary situation in both Afghanistan and Pakistan is a direct outcome of the anti-Soviet containment foreign policy the US has pursued in the Middle East and South Asia throughout the Cold War. It was contended that if the United States was to withdraw its troops from Afghanistan, NATO troops would likely follow suit as well. The withdrawal of foreign troops, Dr. O’Hanlon argued, would nevertheless not end fighting in Afghanistan but would cause a drawn-out civil war. This potential trajectory would heighten inter-ethnic tensions and specifically culminate in a targeting of Afghanistan’s Pashtun populations as Pashtuns would be conflated with the Taliban and the Taliban would be able to control the southern and eastern part of Afghanistan but would lack legitimacy in the remainder of the country, in this case held by ethnic groups such as Hazaras, Tajiks and Uzbeks. Dr. O’Hanlon argued that, in such a scenario, for the US, the establishment of two separate “proto-States” in Afghanistan would significantly diminish Washington’s capacity to project power and gather intelligence in the Taliban-held areas. Based on this strategic analysis, Dr. O’Hanlon suggested that a full withdrawal of the US from Afghanistan is unlikely to materialize and especially described the withdrawal date of 1 May 2021 as unrealistic. Additionally, he argued that the Biden administration would refrain from such actions as it will not portray it in a positive light. He concluded that at least a limited foreign military presence is likely to remain in Afghanistan for the time being. Moreover, it was contended that President Ashraf Ghani may have to take some bold steps in order to significantly advance the Afghan peace process.

Dr. Petr Topychkanov, Senior Researcher at the Stockholm International Peace Research Institute (SIPRI) and former Fellow at Carnegie Moscow further discussed how the US military presence in Afghanistan could pose potential risks on the nuclear stability of the region. More specifically he provided comprehensive recommendations on combatting the danger of nuclear terrorism. He began his speech by providing a definition of nuclear terrorism, explaining how it is an overarching term that ranges from building improvised explosive devices (IEDs) and using nuclear devices built by States, through using radiological materials like plutonium or uranium but also medical materials. Dr. Topychkanov emphasized the fact that the danger of nuclear terrorism also included the means of a terrorist groups using threats with the aim of convincing its adversary that they are in possession of such materials and are willing to use them regardless of whether that is the reality or not. Thus, it is not a matter of certain capabilities, rather the capacity of an extremist entity to capitalize on such threats. Dr. Topychkanov further argued that while Afghanistan is not the most developed country in terms of using nuclear materials, its neighbours, such as Pakistan, India, Russia and China, make it a potential transport hub for the transferal of illegal materials by both terrorist and criminal outfits. Therefore, he highlighted the importance of regional collaboration in regard to the exchange of intelligence information and the protection of borders and transport routes. While he believed that a potential US withdrawal is highly unlikely, especially in the next 5 years, Dr. Topychkanov argued that the number of US troops and their role in Afghanistan is what would possibly have an impact on the prevention of proliferation of nuclear terrorism, since less troops and less military presence will translate in less effectiveness in the sharing of data on radiological and nuclear threats. While he stated that the Shanghai Cooperation Organization (SCO) is a good example of a regional cooperation agency, which works towards achieving those goals, the absence of essential players such as the US hampers its efficiency. Thus, more efforts should be invested in the expansion of joint actions between key players in the region.

Mr. Malaiz Daud, former Chief of Staff of Afghanistan’s President Ashraf Ghani, Research Fellow at the Barcelona Center for International Affairs and Research Fellow at EFSAS, described the anocratic set up of the Pakistani State, being partially a democracy and partially a dictatorship. He described how this so-called ‘hybrid democracy’ of the country is weaved of consecutive cycles of military and semi-democratic rule. While he exemplified how the Army rules the country directly and indirectly and has established a perception that it is more capable than the democratic government to deliver social and physical goods, the Military Establishment of Pakistan currently finds itself challenged, especially by the Pakistan Democratic Movement (PDM) and non-violent & violent insurgencies such as the Pashtun Tahafuz Movement (PTM) and the Tehrik-i-Taliban Pakistan (TTP). He further said that such occurrences are usually triggered by a particular event, and implied that the Afghan Peace Process might be a small possibility. Nevertheless, given how autocratic cycles in Pakistan are accompanied by heightened insecurity in Afghanistan, higher levels of violence are likely to materialize in Afghanistan and in the wider region in the coming years. Yet, Mr. Daud was hopeful that if the international community continues to support Afghanistan, the people of Afghanistan will prevent the Taliban from gaining too much power.

The event was followed by a very vibrant and thought-provoking Q&A session, during which the audience and speakers exchanged views in a debate on dozens of issues including the implications of US troops withdrawal on the stability of neighbouring countries, as well as the trajectory of terrorism of Pakistan-backed and Pakistan-sponsored extremist groups. According to Dr. O’Hanlon, Afghanistan and Pakistan should not be pushed against each other as that inevitably could create chaos in the region and thereby increase the appeal of terrorist organizations of whatever persuasion. He said that it is a fact that Lashkar-e-Taibah is more focussed on India and that the nature of the Pakistani security apparatus and its willingness to work with extremist groups is partly a function of whether it is taking steps forward in terms of diplomacy, economy and development. He argued that Pakistan needs to regain its momentum of the sixties and seventies when it was a different Pakistan from the one of today. This will only be possible when the war in Afghanistan is diminished and violence is not heightened because when Pakistan will thrive economically, there will be less appeal for Pakistani extremist groups. Mr. Malaiz Daud said that he recalled Senator Afrasiab Khattak – eminent Pashtun Rights activist and politician in Pakistan – saying that “Pakistan has created an eco-system of extremism and this energy will at some point spill over to other places”, which could be Afghanistan, Jammu & Kashmir or even Sri Lanka. H.E. Dr. Andisha said that if he could pinpoint achievements of the past twenty years in the fight against terrorism in Afghanistan, the zenith of them would certainly be the advancement of women’s rights and rights of minorities. He concluded by stating that in this complex geopolitical game one must recognize the fact that the Taliban does not represent Islamic scripture or Islamic ideology and is not fighting for the establishment of Islam, but is simply fighting for power. Mr. Daud added that one of the groups that the Taliban has targeted ruthlessly is moderate Islamic Scholars. 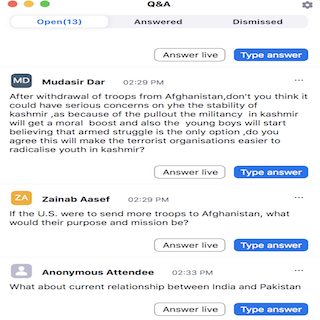 Mr. Qureshi concluded by saying that the same applies to other terrorist organizations in the region, as also in Jammu & Kashmir where moderate voices have been targeted and religion has been misused and presented as the goal for fighting, while in reality it has only been an instrument used to gain control and power. Regarding the Taliban ‘Peace deal’, Mr. Qureshi urged that we must not lose sight of the fact that the basic premise of this agreement is unnatural as it is a manifestation of negotiating with terrorists, which 20 years ago would have been inconceivable.