The European Foundation for South Asian Studies (EFSAS) hosted a very interesting and gripping Webinar titled, Terrorism & Technology, on the side-lines of the 48th Session of the UN Human Rights Council in Geneva. A high-level panel of scholars, researchers, former diplomats and policy analysts discussed how terrorism has evolved in regard to technology. The event was moderated by Mr. Junaid Qureshi, Director EFSAS, and was joined by a large number of attendees, including human rights activists, NGO representatives and researchers. 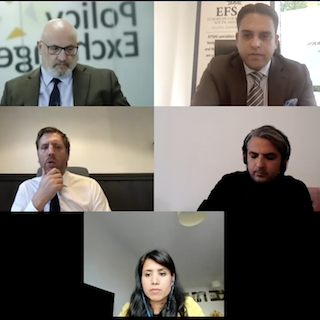 In her presentation, Dr. Weeda Mehran, lecturer at the University of Exeter and specialist in warlordism and conflict and peacebuilding in Afghanistan, explained the evolvement of the Taliban’s media strategy. During the Taliban rule in the 90s, the approach was restrictive, with limited media usage and official messages distributed through radio channels. After the Taliban was ousted from Afghanistan, its media strategy shifted. To gain resonance with the Afghan population, an increase in media presence purposed the attraction of followers, recruits, sympathizers and empathizers. Dr. Mehran elaborated on the factors that assisted in the image-shaping through this tech-savvy approach. By displaying a nationalist angle and the purpose of fighting for freedom in Afghanistan, as well as adapting linguistic and cultural markers to the different audiences, the Taliban succeeded in shaping its narrative accordingly. An expedited pace of distribution of messages captured directly from battlefields with an embedded media unit, contrasting the comparably slow circulation of messages by the former Afghan government or NATO, aided the Taliban’s perspective to gain prominence amass, whereas the perspective of legitimate groups would fall behind.

Dr. Mehran further deliberated upon the role of the improved media strategy of the Taliban takeover in 2021. The strategy of gaining sympathizers over the past years, particularly religious scholars and elders of communities, would be used as a primary footing to initiate negotiations during the conquest of a city, and with this the Taliban established an anchoring of its supporter base which facilitated a rapid advancement in the turnover. Dr. Mehran asserted the intention of the current Taliban’s shaping of imagery to gain acceptance by the international community, and the increased awareness of the Taliban being observed through their media outlets. She highlighted the refraining from violent atrocities in Kabul as a method to further this objective, as well as the restriction of internet usage in other parts of the country to prevent negative imagery that could undermine the groups’ aims. Concluding, Dr. Mehran remarked that the strategic media choices made by the Taliban could either propagate legitimacy or result in an undermining of the Taliban.

The research of Dr. Michael Krona has focused on the online propaganda activities of jihadi groups and especially that of ISIS. During the webinar, Dr. Krona firstly proposed that jihadi groups such as ISIS have increasingly used media platforms for the dissemination of their ideology - as such, their modus operandi has been adopted to the functioning of the media, resulting in the visualization of ideology and Islamic scripture. This, according to Dr. Krona, reshapes the functioning of jihadis as scripture is increasingly communicated through visual means rather than physical person-to-person exchanges.

Secondly, Dr. Krona argued that the increased mediatization of jihadi groups has resulted in them becoming increasingly difficult to distinguish in their online activities. As the online communities of groups such as ISIS and Al-Qaeda have become more fragmented, online supporters have started to bond over ideological similarities rather than allegiances to specific groups. The growing mediatization is especially vital in areas that jihadi groups have identified as spaces for the pursuit of jihad. These new geographies include ‘Khorasan’ in eastern Afghanistan as well as the region of Jammu and Kashmir. He particularly gave the example of the Islamic State Hind Province (ISHP), which has been engaging in anti-India activities and aiming to promote a pan-Islamic agenda in the Indian subcontinent. D. Krona illustrated their very active media propaganda strategy, which is through affiliating with the bigger entity to gain more prominence and exposure.

For groups such as ISKP (Islamic State Khorasan Province), Dr. Krona described online networks as having emerged as key components in the creation and sustenance of popular support for terrorist fighters. Al-Qaeda, which Dr. Krona viewed as having more of a long-term strategy for survival than the Islamic State, has also used online networks to build connections with Muslim communities all over the world and establish affiliates beyond the Middle East.

In line with Dr. Mehran, Dr. Krona concluded that online activities also were of key importance for the recent successes of the Taliban in Afghanistan. Despite the growing use of emerging technologies by terrorist organizations, Dr. Krona asserted that States maintain the technological superiority over non-State actors. Making use of this superiority, Dr. Krona proposed, is going to be particularly pivotal in Central and South Asia in the years to come.

Dr. Paul Stott, Head of Security and Extremism at UK’s leading think tank Policy Exchange and Research Fellow at EFSAS, began his speech describing how historically, technology has been an important tool for terrorist groups, giving the example of the IRA in Northern Ireland. In contemporary times, this asymmetric warfare where the power of belligerents differs significantly, has become even more acute, with Dr. Stott using the example of the recent victory of the Taliban in Afghanistan, where the terrorist entity acquired a great number of military hardware from the US troops who left, making them the best equipped terrorist group in history.

Dr. Stott further examined the technological innovation on behalf of ISIS, which had started using unmanned aerial vehicles (UAVs) for both recording and attacking purposes and by 2017 had been responsible for at least 121 drone attacks as well. According to him, technological change has made propaganda material more available in the West, with the development of the PDF file format, which facilitates the exchange of information even if a website is taken down. Dr. Stott gave the example of Muhammad Aftab Suleman, a British Pakistani who traveled first to Syria and afterwards to Pakistan to develop terrorist materials, such as articles and videos on YouTube. Given how technology influences physical conflict and the propaganda that follows, Dr. Stott concluded his speech arguing that unfortunately there is not a guarantee in this combat between innovators that the government will always win.

The contributions of Mr. Malaiz Daud, political analyst, formerly Chief of Staff of Afghanistan’s President (Mr. Ashraf Ghani), Research Fellow at Barcelona Centre for International Affairs and Research Fellow at EFSAS, tied into the observations made by previous speakers. Mr. Daud contended that social media channels and platforms had been of key relevance for the Taliban in communicating with and mobilizing supporters during the most recent military offensive that resulted in effectively all of Afghanistan falling to the Taliban. WhatsApp was, in particular, seen as decisive for the efficient coordination of military operations.

Crucially, Mr. Daud made the argument that the Taliban’s growing use of social media did not reinvent the group’s social network - rather, it expanded the use of preexisting networks into the digital sphere. This increasingly digital use of existing networks was also used by anti-Taliban forces as anti-Taliban forces focused on co-opting popular Afghan online personalities into their online campaigns.

Ultimately, Mr. Daud suggested, social media platforms such as Twitter did too little to contain the online activities of the Taliban and their supporters in Pakistan. The reporting of anti-Taliban accounts on social media platforms, in combination with Pakistani intelligence agencies actively working to shut down accounts, resulted in anti-Taliban voices being severely restrained online. He also emphasized that the presence of the Pakistani ISI chief in Kabul was to ensure that the Pansjir resistance is crushed.

Lastly, Mr. Daud concluded that the disintegration of the Afghan government could have severe long-term implications in terms of data security for the region as a whole. The data stored by the Afghan government over the past twenty years is now in the hands of the Taliban, who can use this data for the prosecution of anti-Taliban groups in Afghanistan. Moreover, Dr. Daud expressed concerns that the Taliban could trade the available data to their Chinese and Pakistani counterparts who could then use this data to prosecute ethnic minorities in both countries.

The event was followed by a very informative Q&A session during which the audience and speakers exchanged opinions on various topics, including the danger of Pakistan’s nuclear weapons technology falling into the hands of terrorist groups. According to Dr. Stott, Pakistan has no interest of letting its guard down regarding its nuclear weapons and would face annihilation if there was any question of the security of its nuclear weapons. However, Mr. Qureshi reminded the audience of the words of the former American National Security Advisor John Bolton who argued that the US feared Pakistan’s nuclear weapons falling into the hands of the terrorist groups which Islamabad supports.

On the question of the current advancements in counter-terrorism strategies in the field, Dr. Krona stated that it is a perpetual cat and mouse game, while Dr. Stott warned that government authorities tend to benefit from monitoring internet trafficking, opening space for a debate on the difficulty of balancing universal civil rights and security and defence. On those lines, Mr. Daud expressed his concerns regarding the censorship of legitimate human rights activists’ accounts in Afghanistan who are vocal against the Taliban. He further deliberated upon the fact that the rise of the Taliban has inspired and given impetus to other terror outfits in the region, including in Jammu & Kashmir, where the international community could see an influx of violent jihadists and Taliban members.

Panellists further deliberated upon the trajectory of terrorist groups utilisation of drone technology, with Dr. Stott arguing that lamentably it is a matter of time to have a terrorist drone attack orchestrated in Europe, given its great utility for terrorist actors. As concluding remarks, Dr. Stott alluded to the infamous phrase of the world fighting ‘forever wars’, which in our contemporary reality has become ‘forever jihads’.