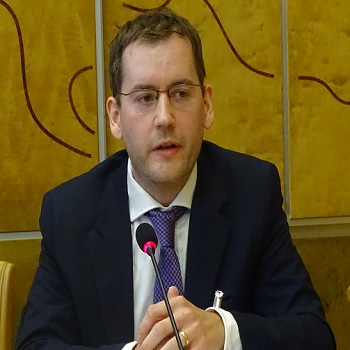 Dr. Matthew Garrod is a Senior Lecturer and Director of the Sussex Terrorism and Extremism Research Network (STERN) at the University of Sussex, United Kingdom. Dr. Garrod is also an independent expert advisor on countering terrorism at the United Nations, a role that has included reviewing States’ implementation of international counter-terrorism legal frameworks in their domestic law and the lead of a pioneering project examining the linkages between organised crime and terrorism around the world. Dr. Garrod’s research areas are on terrorism and counter-terrorism under international criminal, humanitarian and human rights law and legal regime interaction; the use of extraterritorial criminal jurisdiction for holding the perpetrators of terrorist and related acts overseas criminally accountable; and understanding, conceptualising and countering the various linkages that may exist between crime and terrorism in different regions of the world.

Dr. Garrod has co-organised and co-hosted world-leading events with the British Institute of International and Comparative Law and the Royal United Services Institute.

Here you will find contributions by Dr. Matthew Garrod, Fellow at EFSAS.